Born in 1969 in London, Simon C. Russell is a freelance musician, teacher and arranger specializing in double and electric bass. He studied jazz, modern and contemporary music at the City of Leeds College of Music, achieving a Dip.HE in 1995 and since has toured and performed in jazz, folk and Latin ensembles at such venues as The Moulin Rouge, Glastonbury, Celtic Connections and at Folk Alliance International. He appears on over 20 published albums and currently plays with 40’s swing band The Swing Ninjas and acoustic roots/folk group The Mountain Firework Company. 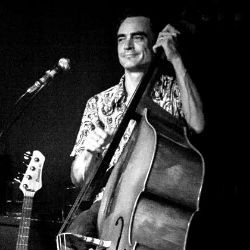